This case study explores a participatory textile making project by Emelie Röndahl. To see more case studies or find out how to contribute one yourself, click here.

Name(s) of practitioner(s) and institution/organisation, if any

The project was developed as an experiment to see if I could share my artistic methods in weaving the ‘rya’ technique with a group of participants unknown to me, found via a call for weavers on a social media post.

When did the project take place?

I wanted to bring a variety of people together: not only in terms of local and international, but also in terms of professional backgrounds, as well as people from different generations. This was not highly prioritised when I wrote the first version of my ‘call for weavers’. For that I instead started with inviting people to take part if they had ‘a connection to the Mediterranean region’, but geographical origin was quite soon replaced by parameters like interest and motivation because I received so many personal and wonderful emails from people wanting to take part. I decided to change the geographical emphasis when I realised the difficulty in defining, for example, a Turkish weaver based in London as part of the region or not. I acknowledged that even a basic question like where someone is from, or where someone lives, resulted in complex answers especially about cultural identity. I saw the potential of having participants with different educational backgrounds as more fruitful and rewarding.

The reason why I created this project was mainly because I saw it as an opportunity, in practice, to explore how different hands created different results, even though we all followed the same instructions: that each individual participant used specific words on Google to search for an image to weave. I assumed that the images would vary in expression and quality, but could not predict how the weavings would look, especially not how they would look installed as a group of tapestries.

The project could never have taken place without the invited collaborators. My aim of the project was to create an installation where viewers were invited to enter and go around in a ‘textile Google search’, presenting many places and many timeframes together. The Facebook page would be seen as many places and different times (‘timeline’ on Facebook) gathered together: a parallel thinking of a workshop-place. 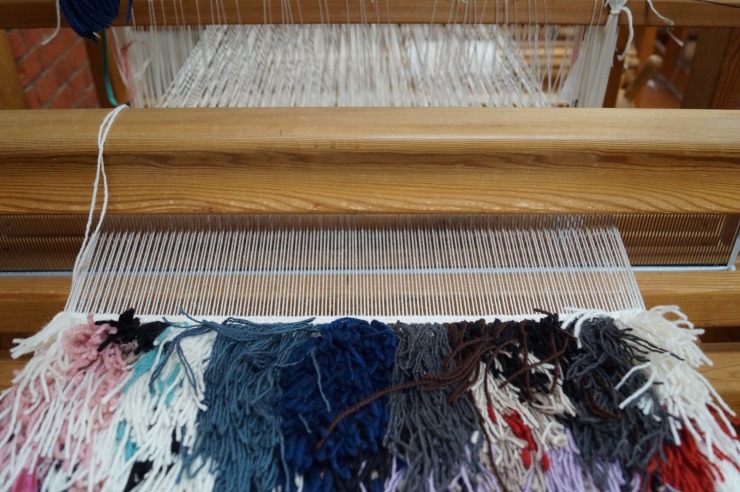 Google Weaving Stop-time is a participatory project which has connected almost thirty hand-weavers via social media. Collectively gathered around a shared assignment and through an encapsulated moment from a Google picture search, participants created tapestries based on the same search phrase: “textile-labour-Turkey”. Participants have created the works in their own studio settings (during spring 2018) with the shared goal to meet together in an exhibition (touring between September 2018 until September 2019 in Istanbul, France and Belgium).

The technique shared is the Scandinavian ‘rya’ knot, also known as the ‘ghiordes’ or Turkish knot,a knot that has been used for centuries in traditional textiles in both regions. Together with other flat-woven techniques such as kilim, pile-woven rugs appear as an essential part of regional culture in both Turkey and Sweden.

Google Weaving Stop-time presented the audience with a globally made installation where digital images are transformed into a physical and material Google search engine.

Why did you choose to work in this way?

The project was developed as an experiment to see if I could share my artistic methods in weaving the ‘rya’ technique with a group of participants unknown to me, found via a call for weavers on a social media post.

What did you learn from the project?

I would argue that taking risks and practically doing something outside your comfort zone is an educational necessity to understand what group work means. I learned that the project still has no ‘good’ closure but that the idea of exhibition(s) overshadowed the process. I should have taken more responsibility for highlighting the process in, for example, the exhibition format.

My greatest lesson through this project is to try to limit my desire of full control if I want to develop a truly collective project in the future. A collective craft project requires a learning attitude, an openness to the goals of others and no predetermined final outcome if the wish is to experience an honest collectivity. There is a need to be honest about our own assumptions and to show willingness to change initial thinking. I believe I might have been much more flexible if we had met offline earlier in the project. To the extent that I have since met my participants offline, the relationships have been strengthened. The friendship of some participants has developed, some have fallen away.

I now have a greater understanding that electronic collaboration is very different from the in-person kind. In conclusion, Google Weaving Stop-time worked ‘well’, in that I mean a misunderstanding from my part that the relationship between myself and the participants did not need to be defined. Everyone did ‘what they should’, for example the participants followed the instructions I gave initially. The term ‘community’ I used before the project was initiated in the practice and I then expected it to be developed as such on its own.

My identity as a weaving artist – here used in a project with so many elements outside my own control – is unusual for me to see visually, but I am impressed with the scale, that all these different woven textiles were made through a simple call on social media. As an extension of my artistic identity, and perhaps mostly my capacity, the project has allowed me to develop as an artist and it has given me a chance to see my own work through reflection and experience.

The communication from me to the participants, for example, how I have developed the instructions based on my own artistic method, has taught me that my practice is subjective despite the fact that almost thirty people have almost completely followed the same manual. My solo work is highly controlled. Although I do not follow a pattern sheet in the traditional sense but use a low-resolution photo as cartoon, more as a guide to pixels and colours, I repeat my aesthetics in tapestry after tapestry and can thus always ‘know’ how the end result will look. The quality of the weavings in Google Weaving Stop-time were all different. The works others produced and my inability to control the weaving quality of others, mattered and influenced the project. This was a big challenge and falls under the category of expectations. But it is important to again declare that the project could not have been possible without the participants involved. I would have been able to weave thirty weaves over a longer period of time, but they would all look more or less the same. In my view, the differences of the weaves in Google Weaving Stop-time are one of the better characteristics in the project.

To initiate and develop the project I was guided by the curator Jan Boelen and the team at 4thIstanbul Design Biennial. I was also mentored by Professor in Design and designer, Onkar Kular (HDK-Valand, University of Gothenburg). My supervisors, Professor in Crafts, Jessica Hemmings, and weaver and researcher, Birgitta Nordström, also supported me. Designer and PhD student Rosa Tolnov Clausen, as well as designer and researcher Annelies Vaneycken, were both helpful and shared their experiences with me. I also studied the work of Lise Bjorne Linnett, particularly her on-going project Desconocida Unknown Ukjent, and she also kindly shared some of her experiences with me.

Revisiting the weaving workshop, 2019, organised together with Rosa Tolnov Clausen and the Research School (HDK-Valand) and the Röhsska Museum in Gothenburg.

During October 2019 the Architecture Hall in the Röhsska museum was transformed into a weaving lab where different ways of practice-based research were explored. This was held on the occasion of the 100-year anniversary of the Bauhaus school.

In the spirit of Anni Albers, Bauhaus weaver, designer and writer, this two-day symposium focused on ways to make practice-based research public. Anni Albers is recognised as one of the first weavers to theorize weaving through the writing of essays as part of her work as a textile artist. Her influence continues to provide us with key references in textile research today. A 4-meter wide loom was placed in the Architecture Hall at the Röhsska Museum as the focal point of the workshop opened for the public. The loom was activated through presentations in October and November 2019.

Further information can be found here.

The Facebook group page we shared for Google Weaving Stop-time is private but there is some information on http://emelierondahl.se and on the Istanbul Design Biennial’s webpage http://aschoolofschools.iksv.org.